9 in 10 Greeks are worried about the environment

A nationwide poll carried out in the context of the LIFE-IP 4 NATURA project, reveals the perceptions of the Greek citizens on nature protection issues.

The purpose of the survey was to capture the Greek citizens’ views on issues related to nature protection, with emphasis on the Natura 2000 network, which lies at the heart of the project’s actions.

Of particular interest is the fact that, although Greece currently has 446 sites listed under the Natura 2000 network and despite the fact that 2 out of 3 Greek citizens have heard of the term Natura 2000, only 1 in 3 is aware of its importance for the protection of the Greek nature. 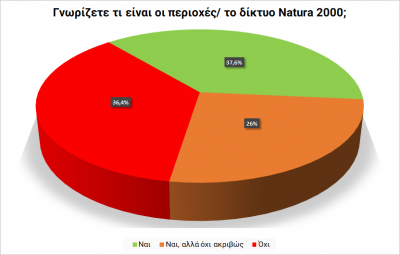 How interested are the Greeks in the environment and which problems do they single out?

According to the survey, 91.1% of respondents estimate that the degradation of the natural environment and the extinction of animal and plant species is now a real threat (95% between the ages of 17-24). This figure confirms the trend depicted by recent Eurobarometer surveys (2017 and 2014), in which Greek citizens appear to be more concerned about the environment compared to the European average (e.g. in 2017, 69% of Greek citizens responded that protecting the environment is “very important” to them, while the equivalent figure for the rest of the EU was 56%). 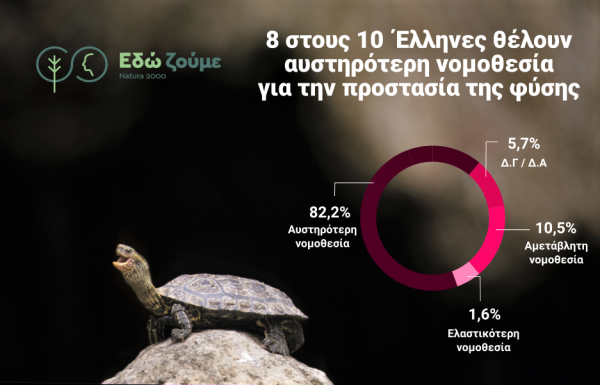 An important finding of the poll is that 82.2% of the respondents would prefer a stricter legislative framework for nature protection, while 92.2% believe that the existing legislation is not being implemented adequately.

On the occasion of the publication of the poll, Deputy Minister of Environment and Energy, Mr. Socratis Famellos, stated:

“The poll offers valuable information on designing and enhancing environmental policy. The Greek citizens’ high level of awareness of the environment is a fertile ground for initiatives to transform the social and consumer life patterns and promote a more active attitude as far as the degradation of the natural environment and the support for the local economy is concerned.

The fact that waste management was highlighted as a major environmental problem, confirms that our initiatives for mandatory source-separated sorting, recycling and for the construction of modern cyclical economy units to prevent landfill, move to the right direction. Furthermore, we do not underestimate the fact that major environmental problems, such as waste and air pollution, are closely linked to growth, quality of life and public health, which obliges us to take more effective initiatives and promote further changes at the levels of central administration, local authorities and production.

The Greek citizens’ level of awareness of the Natura 2000 network leads us to take more initiatives such as the LIFE-IP 4 NATURA project, the expansion of the Natura 2000 sites, the Law on Protected Areas Management, as well as the preparation of Special Environmental Studies and Management Plans for recently listed Natura 2000 sites. In the context of LIFE-IP 4 NATURA, the largest nature conservation project ever undertaken by Greece, €17 million will be invested in this partnership, this ‘alliance’ for Greek nature, designing innovative protection and management tools, and highlighting the opportunities offered by the harmonious coexistence between people and nature. We will continue to aim for the progress of our country, through an effective cooperation between the state, local authorities, private parties, NGOs and citizens”.

You may find the poll results HERE (in Greek).